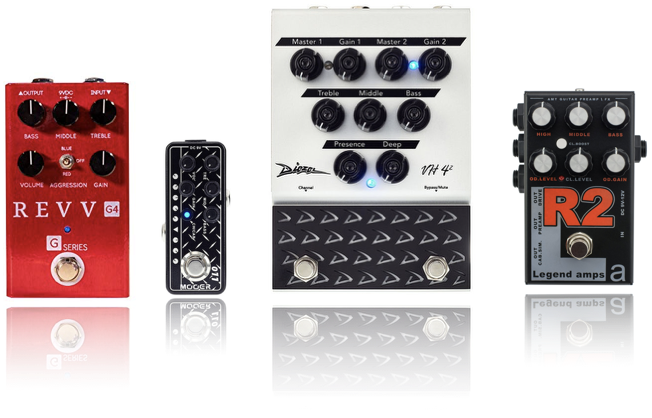 Many preamp and distortion pedals are available on the market nowadays : from very affordable pedals to the most expensive ones. They have become very popular : some guitar players use them to compliment their existing gear and amps in order to access new sounds, other might use them as their main gear for distorded sounds. For the beginners who are discovering these pedals or for the ones that envision to buy one, here is a small introduction on how to use them, especially when combined with impulse responses.

It’s not so easy to really make the difference between the two : some vendors use the word “preamp”, others name them distortion pedals. In both cases – in a metal world – these terms designate a pedal which will produce a distorted sound, typically plugged into a guitar amp, a power amp or a sound card.

After a little search and some gear experiments, I suggest that we differentiate them in the following way :

So, in general, distortion pedals and preamp pedals will provide a different ‘colour’ or voicing, and distorsion pedals may clip the signal harder.

Note: some distortion pedals may be connected to the power amp directly and still sound great ! It really depends on the specific pedals voicing and the settings you use. So, in the end, making the distinction between the two is not always easy 😉

With a guitar amp

If you do not have a guitar amplifier, there might be interesting alternatives such as small dedicated power amp like the Baby Bomb from Mooer (pedal format) or the Seymour Duncan PowerStage.

Without a guitar or power amp

We could imagine two scenarios:

When testing and practicing with such a setup, I am often confronted to a synthetic, dull or harsh sound, that would lack punch and realism. And quite often one of the remedy to this is to add the colour given by the power amp section of a guitar amp.

The power amp simulation can be added to your signal to colour your tone in a realistic way.

Note : you might not always need this power amp simulation to get great tone from your preamp pedal, it depends as well on the impulse response used and the tone obtained directly from the preamp and your pickups.

The power amp section is the last one in a guitar amp, it will increase the output volume to drive the cab speakers. In tube power amps, different kinds of tubes are used, with different voicing and behavior. The choice of tube type and the way they are implemented strongly impact the overall tone (associated transformers, bias level, …. ) . The tubes frequently used in guitar amps are the following:

To get a good overview of power amp tubes, check this page : https://www.premierguitar.com/articles/22739-power-trip-a-guide-to-power-tubes-and-their-signature-sounds.

Another very interesting post, in the same vein : https://www.seymourduncan.com/blog/the-tone-garage/know-your-amp-different-kinds-of-tubes with two videos where power tubes are swapped and tested, one with a 50 watts Orange amp et the other with a Randall Satan.

To understand better the impact of power amp tubes:

In order to get this specific tone change with impulse responses, you can either use a dedicated plugin (when using a computer with a DAW for example), or you can use the power amp simulations available with some impulse responser loader (Wall of Sound, Torpedo Live, Torpedo Cab M, or Mooer Radar for example).

The Two-Notes Wall of Sound plugin embeds a section dedicated to power amp simulation (their hardware counterparts – Torpedo Live, CAB M – have the same feature). If offers no less than 4 different simulations and for each of them, two modes : push-pull ou single-ended.

The available simulations are :

Another option is available : you can select pentode or triode mode. This parameter impacts the type of distortion associated with the simulation.

3 buttons allow you to adjust the main simulation parameters :

This three settings define the simulation behavior and how much “colour” or “power amp character” is affecting your signal, so that it can range from a very subtle to a very strong impact. You will probably need to adjust your input/output levels when you change these power amp settings, and specifically the volume parameter of the simulation. I personally enjoy using push-pull and pentode with 6L6, EL34 and KT88 simulations.

The riffs and partial song covers presented here as samples are used for illustration and educational purposes (using amps and IRs). These riffs and songs remain the property of their copyright owners.

This plugin from Ignite is quite unique as it is dedicated to power amp simulation (if you are aware of other similar plugins, please leave a comment).

When using a computer and a DAW, this plugin can be placed before the impulse response loader :

As for the “rear” panel:

A few explanations on the different settings (taken from the plugin documentation) :

The resonance can be used to “warm-up” some flat or dull IRs, missing body and punch otherwise.

Note : this resonance controls looks similar to the one added by Ignite to their Nadir v2 impulse response loader.

You can find this pack in the links of this video : https://www.youtube.com/watch?v=GVWjtGGvBrk

This site uses Akismet to reduce spam. Learn how your comment data is processed.

OVERKILL Bassist D.D. VERNI: "If We Sold More Records We Would Have Been Up There" With The Big Four https://metalinjection.net/news/overkill-bassist-d-d-verni-if-we-sold-more-records-we-would-have-been-up-there-with-the-big-four

NECROPANTHER's New Single "One And Only" Is Pure Blackened Thrash https://metalinjection.net/new-music/necropanthers-new-single-one-and-only-is-pure-blackened-thrash

FIRES IN THE DISTANCE Brings The Melodeath With New Single "Harbingers" https://metalinjection.net/new-music/fires-in-the-distance-brings-the-melodeath-with-new-single-harbingers

Federico is back with the Captor X, taking on a Bon Jovi classic! 💥

January 28th, 2014: #Metallica released the movie "Metallica Through the Never" on DVD!

DO YOU AGREE?: Why Paul Stanley thinks chasing 'out of reach' goals is idiotic.

NOW YOU KNOW: Here's why Courtney LaPlante likes being in Spiritbox + touring with Ghost and Mastodon.

R.I.P. Tom Verlaine, who rose to prominence as part of the twin-guitar front line of the influential art-punk band Television. Verlaine, who was born Thomas Miller, died on Saturday, January 28, at age 73, after a brief illness.
https://m.youtube.com/watch?fbclid=IwAR0evq42kG_0iK_Zs5QIpJyEFAHScKD5QQ-pdBYT9G3bO6NHU-FqYJoBxg8&v=9gK83wEuefs&feature=youtu.be&mibextid=Zxz2cZ

BEFORE THEY WERE FAMOUS: Over 200 rock star yearbook photos

Tom Verlaine, Television's influential guitarist, has died at the age of 73 https://trib.al/7B8GPWG

Theme by Anders Noren — Up ↑