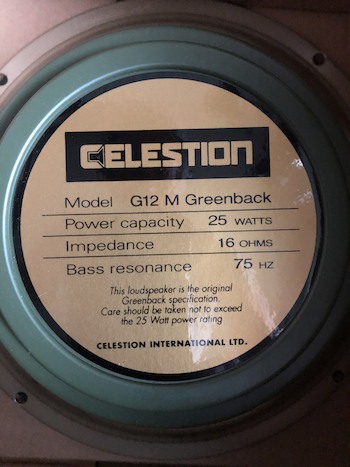 The Greenback has been declined by Celestion in multiple versions since its inception in the 60’s and the 70’s : the Greenback is that classic rock electric guitar tone with a lot of punch and very present mids. It will suit rock, blues and hard-rock players for sure, but metal guitar players and other genres should probably try them : less scooped, less open and less aggressive than more modern speakers (ie V30s), it can provide great tone, with a lot of articulation.

Those two new collections are the first of the ‘Gen3’ series : one is using a KT88 power amp for capture, the other one is using a new class-D power amplifier. The KT88 IRs are more scooped and the class-D ones are more “neutral”, with more low, low-mids and mids : they provide a different feel and tone. I personally enjoy these new “flat” IRs and I think they may be easier to pair with your gear and offer a greater tone range. Please post your comments and let me know what you think about these new IRs versions and your thoughts between the two flavors.

For metal players, these new IRs may require that you scoop your pedals or amps mids to go into metal territory, especially for the Greenbacks. And by the way, for metal players, I found these Greenback IRs to work pretty well with low tunings : worth a try !

Check this post for more info on ‘Gen3’ IRs.

The result is quite different and I found both to be interesting : the KT88 amp provide a slightly scooped tone (check the new -EQ files in the KT-88 collections for ‘rectified’ KT88 tone) that will bring you quite quickly in the metal tone zone, while the class D IRs are more balanced : more low-end (I did not expect that), more low-mids and more mids, with a tad less treble (they are a little bit darker, but that is subtle). The result is that the class D IRs give a fuller tone, and IMHO your gear tone might come through better (less colour imparted on your tone). As the class-D IRs have more ‘meat’ between 0 and 1 kHz, the resulting volume is a little bit higher than the KT88 ones : when using both , you’ll match levels by lowering the class-D ones by approximately 0.7 to 1 dB.

I’ll continue providing KT88 or 6L6 IR collections, as I think they are both really interesting and useable : depending on your gear and taste, you may prefer one or the other, or just use both versions…

See the pictures below to get an idea of the difference in tone :

And some tone demo to illustrate the differences between the two.

You can find the collection on the main IR download page or following this link for KT88, and this one for the class-D IRs.

Overdriven.fr is not affiliated with the brands mentioned on this page. These products and brand names are listed here to describe the hardware used for impulse capture. All brands belong to their respective owners.

For legal notice and information see the about page : https://overdriven.fr/overdriven/index.php/about/

This site uses Akismet to reduce spam. Learn how your comment data is processed.

“I Shouldn’t Have Done ‘Blow by Blow’”: Jeff Beck Reveals His Regrets in This Hilarious Interview https://trib.al/if3fNo1

Paul Reed Smith may hate pedals, but @prsguitars' foray into the realm delivers nothing but gems.
https://www.premierguitar.com/gear/reviews/prs-guitars-pedals

'The End, So Far' Band Member CD packages are available online only.

Introducing BLACKENED Cigars “M81” by Drew Estate, a passion project into the deepest, darkest, and heaviest depths of the mystical Maduro leaf.

Documentary On Late MEGADETH Drummer NICK MENZA To Be Released In 2023 https://metalinjection.net/news/documentary-on-late-megadeth-drummer-nick-menza-to-be-released-in-2023

Happy Birthday to @AlexSkolnick, lead guitarist of @testament and founder of The Alex Skolnick Trio.

His signature pickups cover all the genres Alex is known for, from thrash metal to jazz.

Get a set from our custom shop today: https://bit.ly/37WpYxW

The Making Of: OMENS premieres one week from today.

Get a livestream ticket and watch on-demand through the month of October at http://watch.lamb-of-god.com. If you’ve already pre-ordered a CD/Vinyl from our US store, your code will be emailed to you next week.

Theme by Anders Noren — Up ↑